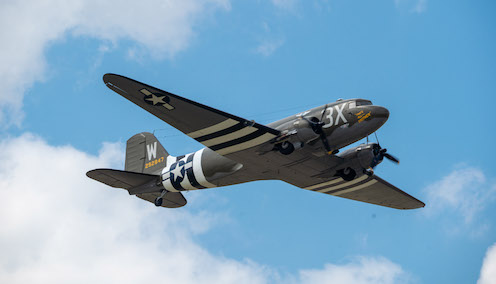 April 5, 2019, Lakeland, FL – The Commemorative Air Force (CAF) announced April 5 that Phillips 66® Lubricants will sponsor the iconic World War II aircraft, C-47 That’s All, Brother. This summer, That’s All, Brother will participate in the 75th Anniversary of D-Day and participate in a series of commemorative ceremonies. The sponsorship is part of a grand effort to support this historical aircraft’s monumental journey across the North Atlantic to return to Europe and retrace the flight across the English Channel to Normandy.

“We understand how important it is to keep aircraft like this flying and keep the memories and history of the Greatest Generation alive, and we are proud to support these passionate volunteers who are taking on this major effort,” Scott McRee, General Manager of Phillips 66 Lubricants, said in a statement. “Phillips 66 made important contributions to the war effort, particularly through innovations in the production of “cold” synthetic rubber and development of the HF alkylation process for high-octane aviation gasoline.”

The airplane’s painstaking restoration included updating engine parts to ensure it will run cleaner and more efficiently during the tour by utilizing the technology of the most modern Phillips 66 aviation lubricants.

C-47 That’s All, Brother will tour the country before departing for Europe. Along the way, the aircraft will stop in Louisiana, Florida, Alabama, Georgia, Delaware and will leave from Oxford, Connecticut. A second CAF aircraft, D-Day Doll, also a veteran of the D-Day Invasion, will be traveling across the country before departing to Europe. The two CAF aircraft will join 17 other American C-47s for the crossing of the Atlantic. The American fleet of C-47s, known as the D-Day Squadron, has spent years preparing for the epic journey. The D-Day Squadron will participate in “Daks Over Normandy” an event that commemorates the Allied invasion of Normandy by flying aircraft from Duxford, England into France with more than 200 paratroopers jumping into the historic drop zones, all wearing World War II era uniforms.

“We are so grateful to Phillips 66 Lubricants for the support they are providing for the aircraft and crew. This mission is only made possible with the help of businesses and individuals who appreciate the value and importance of an event such as this,” said Joe Enzminger, CAF unit leader. “These aircraft take a significant amount of time and resources to maintain and fly. We have been preparing for this journey for years. It is important to be there. This will be the last major anniversary of D-Day for many veterans. The invasion of Normandy signified a major turning point of the war in Europe. While on tour we hear story after story of how much this single event impacted people’s lives.”

Houston, Texas - Phillips 66®  and Kendall® will add their most advanced diesel engine oils yet to their proven heavy-duty product portfolio.…

WHY PHILLIPS 66® X/C® IS THE BEST OIL FOR PISTON AIRCRAFTS.

The industry’s leading multiviscosity aviation oil – Phillips 66 X/C 20W-50 – is celebrating its 40th anniversary. Since its launch in…

THE LATEST AND GREATEST

THE LATEST AND GREATEST

Thank you for subscribing!

Thank you for reaching out,
one of our experts will contact you soon.

In the meantime, check out some of our online resources.

Thank you for subscribing!